AGOVIRAX is indicated for prophylaxis and supportive treatment of viral infections of the respiratory tract.

Agovirax is approved for use in adults and children from 1 year of age.

Mode of action of AGOVIRAX

Common cold and flu-like illnesses are caused by a large variety of viruses, such as rhinoviruses, coronaviruses and others. The nose is the most common route of infection. If viruses have penetrated into the nose, they can attach themselves to the mucous membrane and infect mucosal cells where they multiply and spread. This results in the typical symptoms of a cold, such as a blocked or runny nose, sore throat and/or headache, cough, etc.

It creates a protective layer on the nasal and oral mucosa thus preventing binding and entry of the respiratory viruses into the cells. Thereby viruses cannot attach to the mucosal cells and infection is stopped.
AGOVIRAX forms a moisturising, protective film. Due to the action of Carragelose®, this film remains on the nasal mucosa for longer and serves as a physical barrier against external influences. This physiological moisture film supports the body’s natural defences against cold viruses.

Viral respiratory infections can be caused by more than 200 viruses. They are spread by air droplets, infected by coughing, sneezing, and so on.

Viruses that cause respiratory infections attach to cells in the nasopharyngeal mucosa, the cells internalize the viruses, and then they begin to multiply.

At the first signs of a common cold (such as tingling or runny nose), it is recommended to spray Agovirax® at least three times a day into each nostril.

Agovirax® creates a protective viscous layer on the mucosal surface Iota-carrageenan attracts viruses and they get stuck in this material. This stops the spread and further multiplication of viruses.

“Bound” viruses are removed naturally (with the help of micro cloth -cilia- of the mucosal surface layer of cells). The infection is prevented or it passes faster.

The active substance of Agovirax – iota carrageenan – is a sulphated galactose polymer derived from edible species of red seaweeds. Carrageenans are large, highly flexible molecules with an average molecular weight of ~1 mio. dalton. There are three main types of carrageenan: Kappa, Iota, and Lambda. They differ from each other in sulphation degree, solubility and gelling properties, also they can produce different biological and toxicological effects. Clinical studies with various types of carrageenan confirmed that Iota-Carrageenan is a potent inhibitor of virus infectivity in vitro and acts 10.000 times better against the tested respiratory viruses compared to other types of carrageenan (Grassauer et. al, 2008).  Two other related polymers Lambda- and Kappa-Carrageenan show moderate effects and did not fully inhibit virus. (Leibbrandt et al 2010).  Later studies in vivo with adults and children confirmed broad spectrum antiviral efficacy and therapeutic effects of iota-carrageenan.

AGOVIRAX is safe to use during pregnancy and breast-feeding

AGOVIRAX use and method of administration 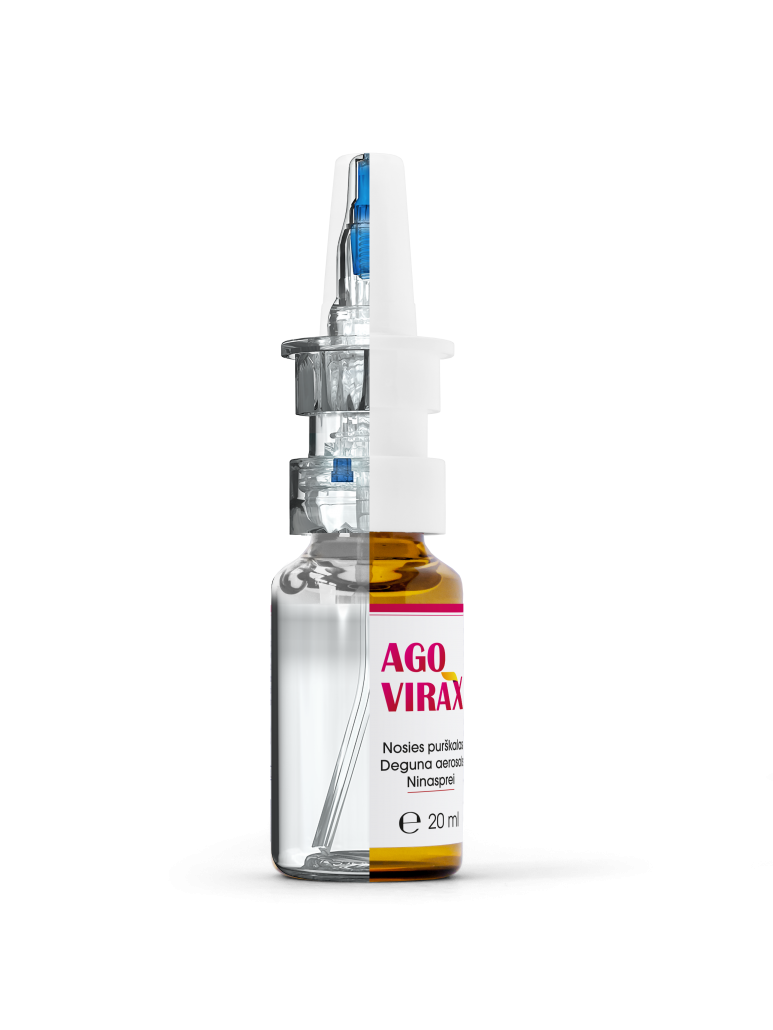 Due to the advanced technology used in the spray system, such as a metal-free fluid path, a vented preservative-free system, a special filter membrane and tip-seal technology, the product is safeguarded from contamination and remains sterile for 12 months after first use.